It wasn't my first time paying the Netherlands a visit last week, but it was the first time since the birth of Better Raw. And because now I was seeing everything through a different lens, you can argue that this was really the first time after all.

Come on a mini walking tour with me...

I had all sorts of intentions to try every single raw food cafe in the city, but... 1). I underestimated how many choices were available, especially that I was only there for 30 hours. And 2). I didn't expect to be catered for by the most beautiful hosts with their delicious homemade smoothies, pesto courgette pasta, raw chocolates and chia puddings.
As awesome as that is for me, I'm not so sure that Marjolijn and Jesse have plans to open their own restaurant any time soon (they already run www.superfood.nl and www.detoxyourworld.com), so I figured that even if I grabbed a small snack somewhere, I could report back to you on what raw food eats are available in Amsterdam... 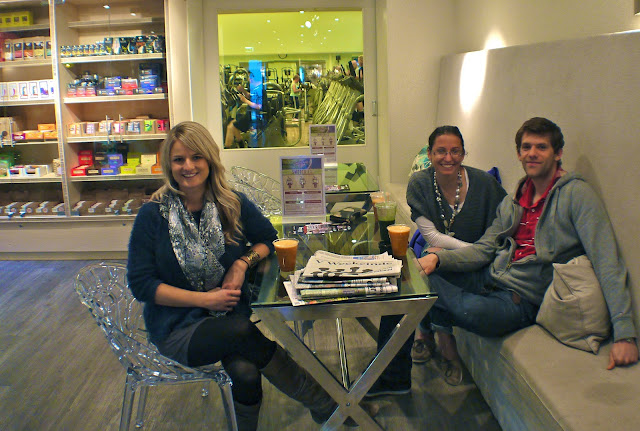 Our first stop was the Superfood Centre, an all-in-one wellbeing hub (check out the people working out in the background at 9am Sunday morning). I just arrived then and wasn't hungry for the big selection of their cereal bar/ snack/ chocolate/ superfood range, but they had a juicer, which may as well have been called 'the transportation device to heaven' and at that point I wouldn't have known the difference. 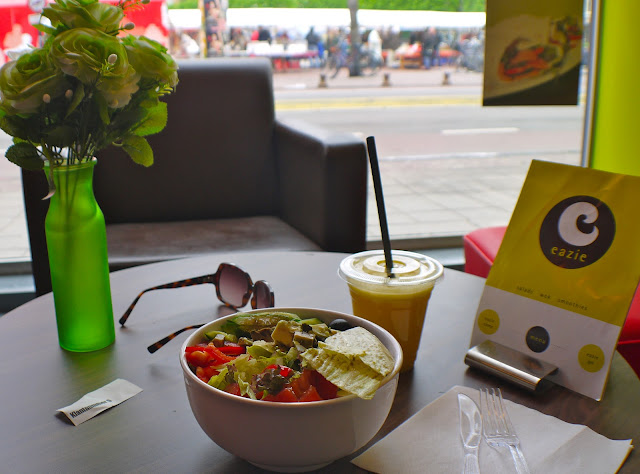 Eazie was a lunch time stop. To be honest it wasn't on my list and I was heading elsewhere, but the fact that it said 'Salads, Woks, Smoothies' caught my eye and woke up my hunger. I had their basic Greek salad and the most delicious 'Crazy Coconut'- banana, pineapple, orange, coconut smoothie. This I think is a great example of one of many restaurants, where you can find a full raw meal, without it specialising in our funky cuisine. 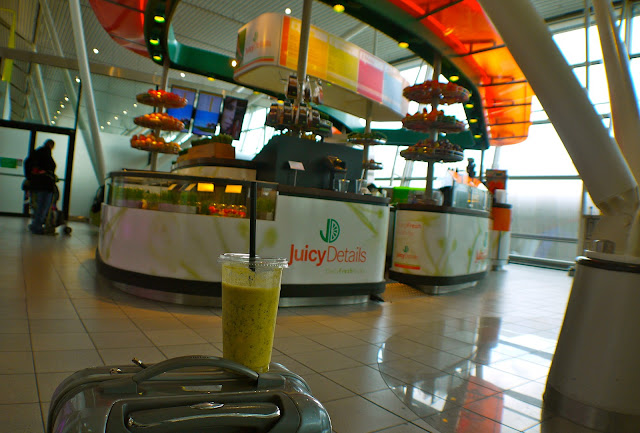 Juicy Details at Schiphol Airport was a very VERY exciting discovery and made me seriously wonder why every airport doesn't have a juice bar. Flying is so taxing on our immune system, but a juice or a whole food smoothie before and after a flight is all that is needed to rebalance, ground and reinvigorate our precious body.
Here are some of the places I never made it to, but hopefully if you visit Amsterdam, you can benefit from these suggestions...
The Soulsister sells vitamins, superfoods, natural cosmetics and it has a wheatgrass bar! You could even grab yourself a handy booklet called InLivin' The Good Life Guide To Amsterdam, while you are there.
Unlimited Health seems to have it all- a health foods store, a yoga centre, as well as a juice bar, restaurant and a bistraw, where you can get some apparently delicious salads, quiches and cakes to eat in or take away.
Golden Temple has been recommended to me for their raw chocolate slice and other cakes on the permanent desserts menu, but if you would like a three course raw food meal, reservations will need to be arranged in advance.
Bolhoed looks really good for a vegan (not raw) option and by the sounds of the reviews, definitely a place I'd like to pay a visit, especially being so near Anne Frank's House and Noordermarkt.
Did I miss any of your favourite raw food eats? Maybe even just a vegan option? Let me know in the comments below...