I love you.
You make me so happy.
Thank you for last night.
It was magical.

No, but seriously- how good are Flight of the Conchords live? I can't even believe I said good! They were hiiilarious. Fully awesome; choice; mint; primo; mean; sweet as bro. That's pretty much all the kiwi slang I can come up with, although I am sure there has to be another word that stands for 'best ever'! Surely. Kiwis? 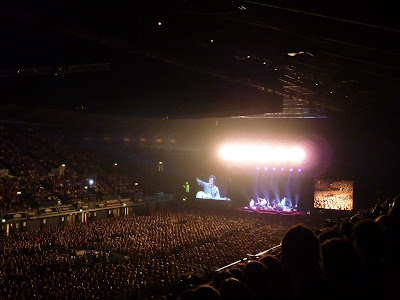 [yep we sat right at the back]

'The band' performed at Wembley Arena yesterday and made me miss New Zealand so much. Omaha Beach, Coromandel, Piha, Pauanui, Whitianga, Maraetai, Long Bay Beach, even Eastern Beach! I think I may have just named all the beaches. I think I am having beach withdrawal symptoms. I think I need to get to a beach really soon. Really soon! 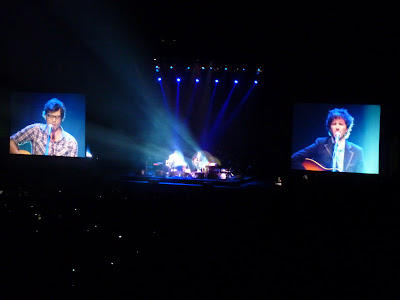 Not only beaches either, for some peculiar reason I could not stop thinking of fejoas. My Lord, did I salivate at the thought. I could almost smell a fejoa, thinking about this fruit so much. And I decided as soon as we step foot on NZ soil for a visit in January, that is the first thing I will be eating.

For now though, there is the next best thing.. and I did not fluff around getting to the local vege markets for a one handsome ripe pineapple and one heavenly young Thai coconut, because together they make one outstanding Pina Colada! 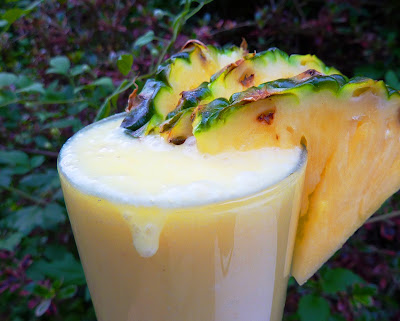 To slice pineapple:
1. Twist off the crown
2. Chop pineapple in half (deal with half at a time)
3. Skin with a sharp knife
4. Chop into quarters lengthwise
5. Cut the core out
6. Slice into whatever sizes your blender will take
To open a young coconut:
1. If it doesn't already look like mine in the picture, then you better get your nice local vege market man to carve it, or you may strugle with just a kitchen knife.
2. Shave skin of the top of coconut to reveal the shell
3. Tap around the diameter of the top of coconut with the cleaver edge of large knife, until you find a soft spot
4. Force the sharp end of the knife under the ‘cap’ you’ve created, turn upright so the water doesn’t pour out and pop the cap off. Coconuts have circular grain
5. pour water into blender
6. scoop all the jelly meat out and add to blender with pineapple
Blend. And then forget about everything
2 comments