If there was ever a soppy lover of raw food and an insatiable bounty hunter for all things nutritious and wholesome - you've just found them on this page. For me, it doesn't get much better than raw food and warm afternoons - preferably the two together but as long as there's raw food in the world and special people to help give it a platform, I'll be there with my trusty lasso.
I'm super excited and delighted to share with you my recent experience with some highly nutritious raw food snacks and treats that I had the privilege of lassoing :)  Be sure to leave your thoughts and comments about any of these goodies.
Love & Light,
Kelly :)
Reishi Crackits, InSpiral 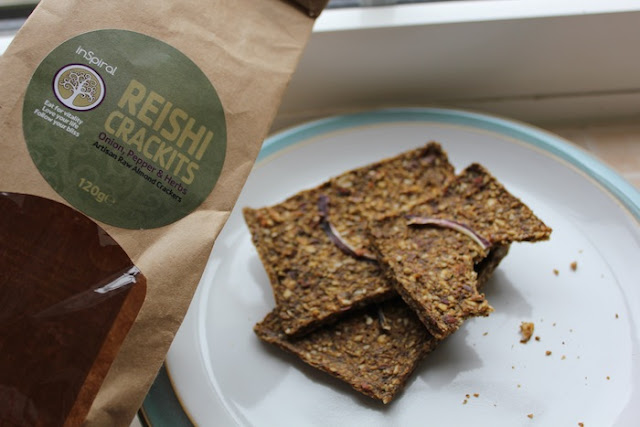 I was really excited to try these super-raw, dehydrated Reishi Crackits for the first time as I had been reading about tonic mushrooms and their mega, immune-boosting properties.
These particular crackits are flavoured with tangy onion, black pepper and herbs and boy, are they a heady treat for the senses - as I was to find when I got inside the packet.
On smell, they have a sweet, smoky fragrance which I found particularly appealing. On texture, you get a nice soft chewy crunch which won't disturb your work colleagues or make you have to turn up the TV mid-munch. On taste, all those added flavours really do sizzle without being overpowering or leaving that unpleasant onion-taste in your mouth - most important if you're working around others!
Particularly note-worthy though is how nutritionally-dense these babies are. You'll find little gems such as almonds, sunflower seeds, carrots, courgettes, chia seeds and flax seeds - all packed tightly into a single crackit. Eating this variety of nuts and seeds in a compact cracker makes getting your daily protein and omegas so much more easier - I love that.

It gets better as these heavenly offerings are not only nutritiously raw but also vegan, wheat-free and soy-free. I'm a big snacker and am always seeking out healthy alternatives to biscuits and crisps. I definitely found it in the humble, nimble crackit.
Freeze-Dried Durian, InSpiral 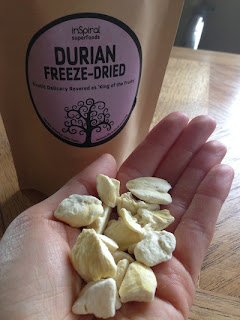 Revered as 'King of the Fruits' in South-East Asian countries, though probably better known for its somewhat funky aroma.
I was extremely excited to try Durian for the first time, having absolutely no reference point for its taste, texture or smell but having read about its reputation as a vitamin and mineral-rich treat.
Living in a distinctly non-tropical climate (boo hoo) means it's very rare to find fresh Durian, so to be able to try the dried variety is the best I could hope for.
The golden jagged-edge pieces of this fruit mimic little shards of honeycomb - even down to its light, crunchy texture. Although the smell and taste bear no resemblance whatsoever. That's where Durian is in a class of its own. It has the most surprising taste - it's definitely not unpleasant - but it might not be what you would expect from its appearance.
Most tropically-grown fruit such as pineapples, mangoes and papayas are incredibly sweet to taste - even the dried out versions - but I didn't feel this was the case with dried Durian. Maybe it started out a little on the sweet side but as you get into the chew, this unique savoury flavour begins to take over.
I would even go so far as to describe the flavour as onion-like. I hope that doesn't put you off trying it! Just to be certain I wasn't going mad though, I asked some of my family members to try the Durian for themselves to see what they thought. Without my even mentioning the onion taste, everyone immediately said it had a soft onion flavour that was very savoury and enjoyable.
So there you have it - a tropical fruit that tastes like a savoury vegetable. Well, sort of. Try it for yourself and see what you think.
Powdered Baobab (a.k.a The Feel-Good Fruit of Africa), Detox Your World 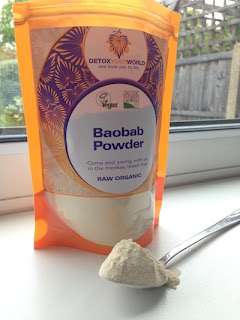 To fully appreciate the breadth of this super-fruit, allow me to quickly run through some of its vital statistics for you.
1. Natural multivitamin - super loaded with vitamin C, calcium, potassium, thiamin and vitamin B6. That all means that you'll benefit from increased energy and metabolism (hooray), a reinforced immune system (bye, bye bad guys) and a reduction in tiredness and fatigue (now you're talking).
2. Rich in Fibre - astonishingly, Baobab is 50% fibre, half of which is soluble - easier to digest.
3. High in Antioxidants - Baobab really takes the prize here. It contains one of the highest antioxidant capacities of any fruit in the world! It has five times the antioxidants of Acai berries and twice that of Goji berries. Wow. Impressed? I clearly am.
So how does it taste? When I got round to experimenting with this super-friendly super-fruit, I first diluted it into some pure distilled water to get the full impact. I was pleased to discover a very lemony, almost sherbet-like taste which was enjoyable and easy to drink.
You could easily combine this powder with items in your regular juice or smoothie. I did this several times by mixing it with a combination of bananas, spinach, lemons and parsley. Whilst it's harder to pick out the delicate taste of the Baobab when its surrounded by other flavours, just knowing it was there and giving me a nutrient boost was sweet enough.
This super-fruit even tastes good all by itself. I've taken to scooping my finger into the powder and enjoying it totally neat - as if my finger was a replacement piece of liquorice in those much-loved sherbet dips. I think I've come to enjoy those tangy tongue tingling sensations a little too much. So there you have it: three things, all raw, all delicious. Look forward to posting more reviews here very soon... Happy munching :)
0 comments